In the old UI, when you had more than 3 steps in your manual auto-scripts you had the option to start over and remove all the steps in a single bulk operation rather than deleting all the steps one-by-one. We lost this functionality in the new UI, but now it's back.

In the old UI, frozen scenarios would be shown with an icy blue background in the table of scenarios. We lost the coloring in the new UI, but now it's back. Thank you to user Dorothy for pointing out this omission.

Description of mixed-strength scenarios in revisions

During the terminology change over from "Requirements" to "Forced Interactions" we missed a few instances of the old term in more obscure parts of the user interface. These have now all been changed over.

We normally don't comment on these type of DevSecOps improvements here since they don't directly impact you as a user of the tool, but since we are all involved in the software development life-cycle in our respective teams, I thought it might be interesting to mention that we moved from a cloud-hosted Jenkins server and AWS CodeBuild as our CI/CD pipeline to GitHub Actions to power our CI/CD pipeline.

The benefit here is a bit over-determined, as a result of the move we have better pipeline performance, stability and reliability, and reduced costs.

As a potentially interesting addendum, "CI/CD pipeline" has become a generic term that is often used to describe just continuous integration, but here at Hexawise our pipeline is a full CI/CD pipeline and we do continuous deployment as well.

The toggle between single and bulk parameter editing had a layout issue in the Safari browser. This is resolved.

Very long parameter names, longer than about 3 lines, are now middle truncated in the user interface for defining parameters.

A very long expected outcome would case some wrapping during the display of generated scenarios. This is now resolved.

Hexawise remembers which screen of Rules, Scripts and Review that you last accessed for a plan, and returns you to that most recently accessed screen on navigation back to those sections leading to more efficient navigation around a plan.

Some links to actions in constraints and revisions were low contrast and hard to see/read. These have been fixed.

It was tricky to get to a plan's properties to update them when the plan was already open. We've addressed that with a new option in the plan name drop down. 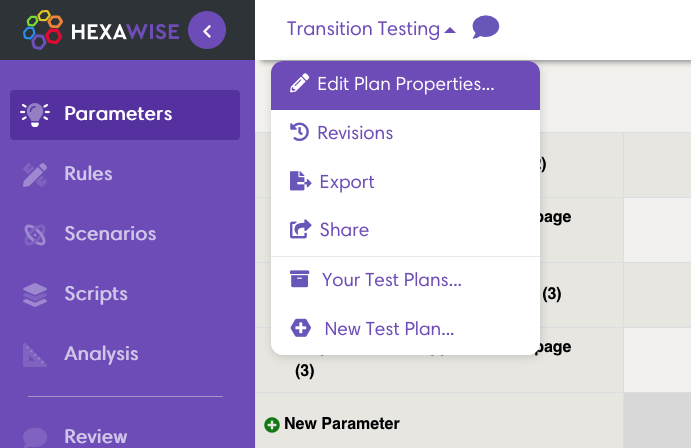 Wherever possible and reasonable, the note data entry UI now has focus and is ready for immediate typing or editing of a note.

Confirmation on emailing an export

There is now a success confirmation when you email yourself a Hexawise export.

There is a warning explanation in the user interface when generating multi-strength scenarios, and not choosing a sufficient number of parameters for the selected strength. There was a regression in this warning state so that it did not allow you to continue on and correct the issue. This has been resolved.

This update was many months in the making, and we're happy to introduce a refreshed user interface for Hexawise. 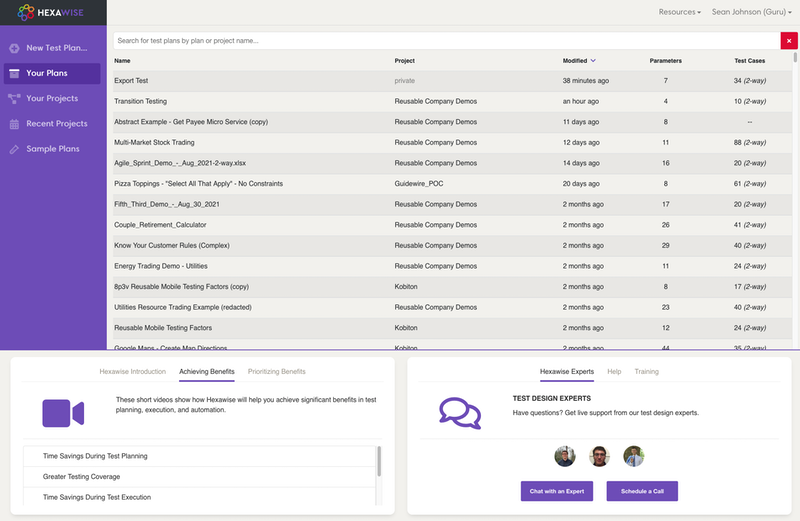 You can learn more about the UI refresh in this short video.

There was a pairwise defect when freezing test cases that included the use of an advanced skip constraint. This has been resolved.

Fixed a short-lived regression in which editing existing parameters individually would result in parameter value duplication in some cases.

Thank you to Velu for reporting the issue.

Robot Framework is an open source test automation framework that has easy syntax, utilizing human-readable keywords. Its capabilities can be extended by libraries implemented with Python or Java. The framework has a rich ecosystem around it, consisting of libraries and tools that are developed as separate projects.

Now when you create a new test script in your test plan with Hexawise Automate, you can chose to create a Gherkin feature file or a Robot Framework script. 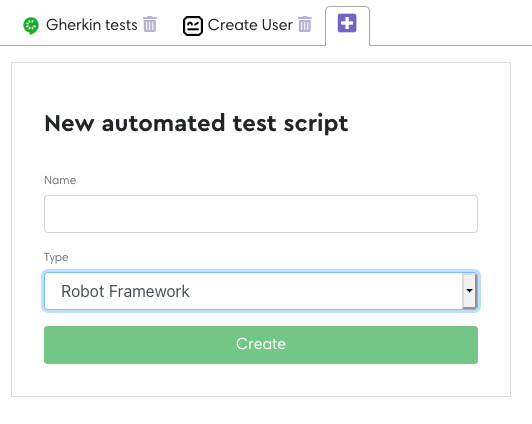 A Robot Framework script in Hexawise Automate works very similarly to Gherkin scripts. Gherkin Given/When/Then syntax is used in the Test Cases section of the script to specify one or more data-driven test case templates. 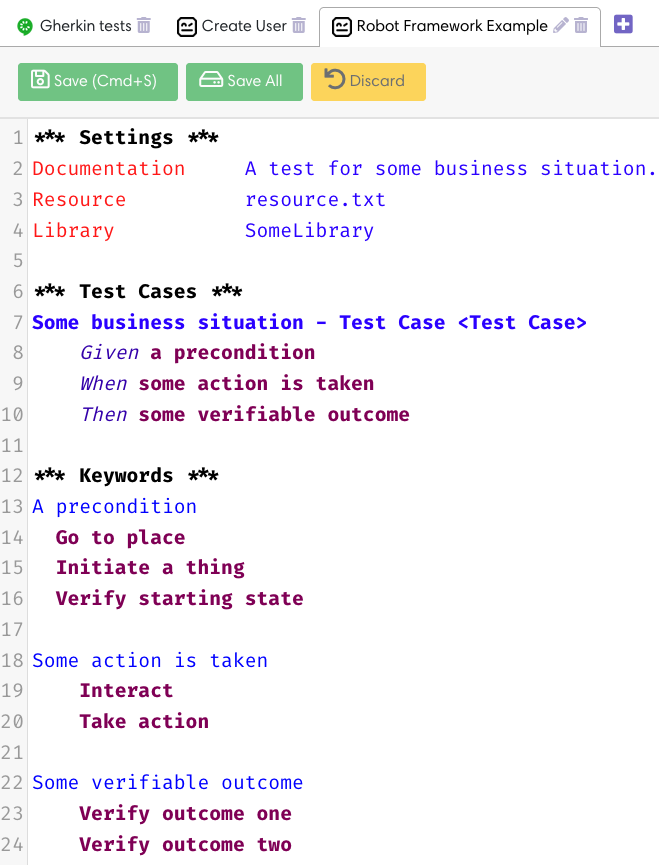 Hexawise Automate then automatically generates as many test cases from the template as are needed for the test plan. As with Gherkin scripts, parameter values from each test case can be included with the <Parameter name> syntax, which will be auto-completed for you once you enter a < character. 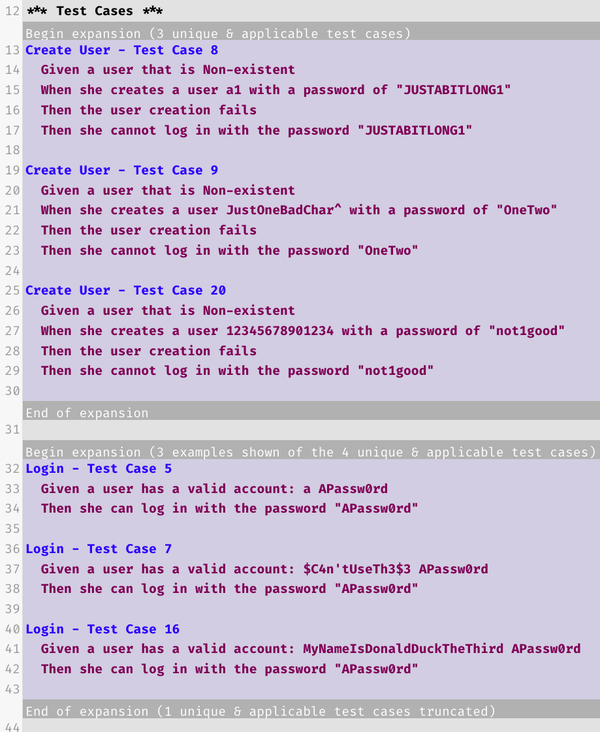 You'll get all the generated test cases when you export the Robot Framework script. 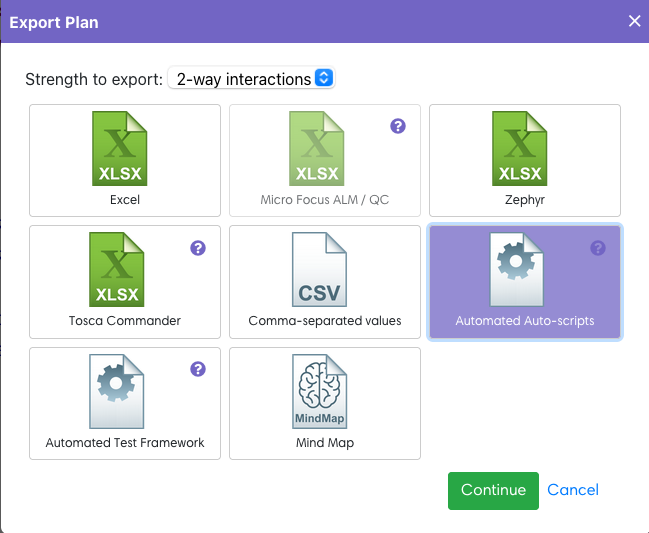 You can read more about Hexawise's Robot Framework support by creating a new Robot Framework script in your test plan and then clicking the blue "Usage" button in the top right of your Hexawise Automate screen.

If you used the save hotkey rather than the save button (usage variation!), the save was not disabled while a save is in progress allowing an impatient user to saturate the server with save requests and compromise their save integrity.

You can now add a data table to a Background section in your Gherkin in Hexawise Automate. Before if you added one it would have been removed from your script.

The use of " or ' to mark a parameter in Gherkin is not entirely defined or consistent in the Gherkin syntax. We have some Automate users that use them around parameters (e.g. When the "<selection>" is made) and many that don't (e.g. When the <selection> is made).

We've improved things so that we don't inject quotes some times (Automated Test Framework exports) and not other times (Gherkin feature file export) which leaves you with slightly different feature files depending on how you chose to export it.

This area has been improved but is still not perfect as the handling of quoting in the Automated Test Framework generation is both complicated and external to us, and as mentioned, we have to deal with the case of quoting being present in the script from the user and not being present. More could possibly be done here, so certainly let us know if you are running into any issues related to quoting in your Gherkin.

A regression caused inline " and ' in steps not to be highlighted syntax.

In some cases a user entered data table for a step would not persist after a script save and load. This is resolved.